The actual physical structure of the brain changes based on the environment. This means that what you do with your baby or toddler results in physical changes in your child’s brain1,2. Environmental enrichment causes changes at the neuronal level and results in improvements in cognitive performances1. The important effect of the environment on brain development is evident from a study that shows a family’s socioeconomic status predicts statistically significant differences in both brain structures and functions2.

Educating parents about the importance of the environment can also have long-term positive impacts on the lives of at-risk infants. For example, in weekly one-hour sessions over two years, Jamaican health workers encouraged parents to play and interact with their babies in a way that would help their cognitive abilities. Twenty years later, the children who were involved in the intervention made 42% more in their jobs than a control group that did not receive the early intervention3.

Why does the early environment have such a large impact on the physical structure of a child’s brain?

We strongly encourage parents to use the tips on this website to create a positive, language-rich environment for infants and toddlers. In addition, it is imperative to provide adequate nutrition for proper brain development both during pregnancy and during infancy4, 5.

According to this theory, movement information is used along with sensory information for infants and movement could be considered as a sense for infants. If a baby learns through three senses (for example, visual, auditory, and haptic) along with movement, then there would be an elaborate series of brain connections that form from the:

You can see from the above that there are many more brain connections that are forming when there are three senses along with movement compared to learning through a single sensory system, according to Edelman’s Theory of Neuronal Group Selection. Having a more elaborate series of connections allows multiple ways for infants to access this information. The actual physical structure of the child’s brain changes based on the number of sensory systems that are incorporated. 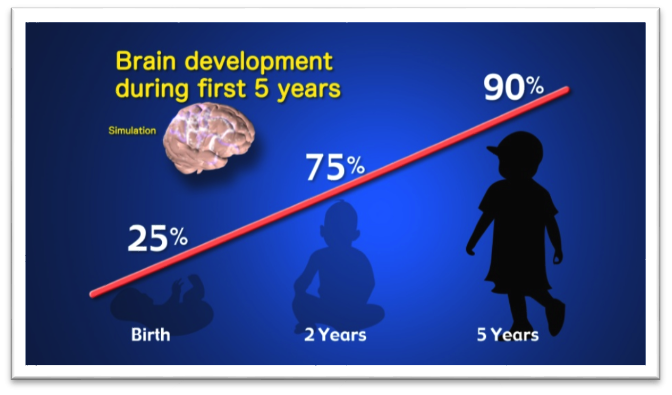 Since about 90% of brain development occurs by age 5, what the child is taught in the first years of life has a lasting impact on the child. Furthermore, the best predictor of academic success at the end of high school is how well the child was doing on the very first day of school7. Negative caregiving has long-term negative effects on brain development including working memory and inhibitory control functions8.